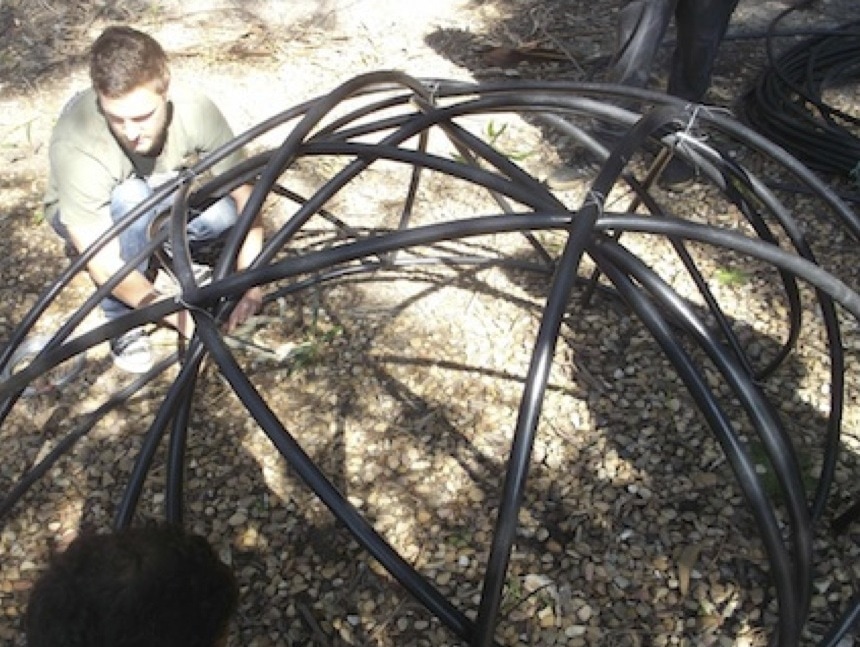 I recently learned more about green building design at a workshop on geodomes by Pete Staley of the Permaculture Research Centre in Cape Town. For the practical element of the workshop we were to set about building two small geodesic domes of different types and one large one. We also were to build two other dome types, out of flexible tubing, a flexible double walled dome with a pentagon and five pointed star at the crown. ​

Pete discussed a number of light dome types in addition to these, many of which are found in traditional building. In the beautifully presented notes from the course he sent us, there is a diagram of different types of domes arranged in a typology. There are two basic kinds of construction in the typology, rigid domes using struts (like a geodesic dome) and flexible dome structure using bendable poles. The geodesic dome derives from the tetrahedron, cube or icosahedron. But I can think of examples of such simple forms used as buildings. The tetrahedron, like a tripod, reminds me of some forms of tepee, the cube of a normal rectangular frame house, which would be clad with wood, or slate or wattle and daub. The icosahedron may have been built, I can't think of examples directly. ​

Flexible domes may be built out of what I analyze as full bows or half bows . A full bow has both ends in the earth and curves upward to form the dome. There are two types of designs without central hub, called raster designs like the wigwam where the bows are parallel, and star dome designs in which they are grouped to form pentagons or hexagons. It is so much easier to understand visually than verbally, and I suggest you have a look at the pictures in the url at the end of the page.
Domes with a central hub at the apex, at which all the bows are tied or cross over each other can be ones using full bows, called a uni dome, or half bows. The two half bow types are the cross tie and peak tie. In the first the tips at the apex are bound together parallel to each other like a bunch of twigs is bound in a faggot, examples are the birdcage dome. They tend to form an onion dome shape, first convex then concave. In the cross tie the tips at the apex cross over each other and the ends are at right angles or more, to each other. These will form a smoothly convex dome with a point like the shape of the dome of the rock.

The wisdom of green building design is nothing new. Our ancestor's building materials also had to be used with economy, keeping ease of assembly in mind. The tepee has crossover ties, as does the bird cage, the Yurt has radiating spokes around a central hole or chimney as a hub. The Wigwam pattern of dome is built of arcs running parallel to each other getting smaller to the edges of dome, intersected by another set at right angles. There are many traditional examples on the net. In north America the  sheets of building material were often suspended from the ribs of the wigwam so that the ribs remain on the outside of the house, whereas in the Matjieshuis, invented by the Khoehoe people who have lived here at the Cape since at least two millenia before colonization, I believe the mats lay over the ribs, concealing them, except from the interior.
Recently a few new flexible dome types have been added to the repertoire of green building design: The name Zome dome has many applications but generally is composed of two curves attached at the tips to form a petal shape, a number of these are arranged radiating from one point, overlapping like a flower’s petals and then put through a curve to make a dome shape. In plan it can look like intersecting circles, in cross section helical. The star dome has the least strength, consists of a five pointed star made of five arcs attached to a base circle. It has the advantage that all arcs are the same length. There are also six pointed stars in hexadomes or even the full spherical form the hexasphere. ​ 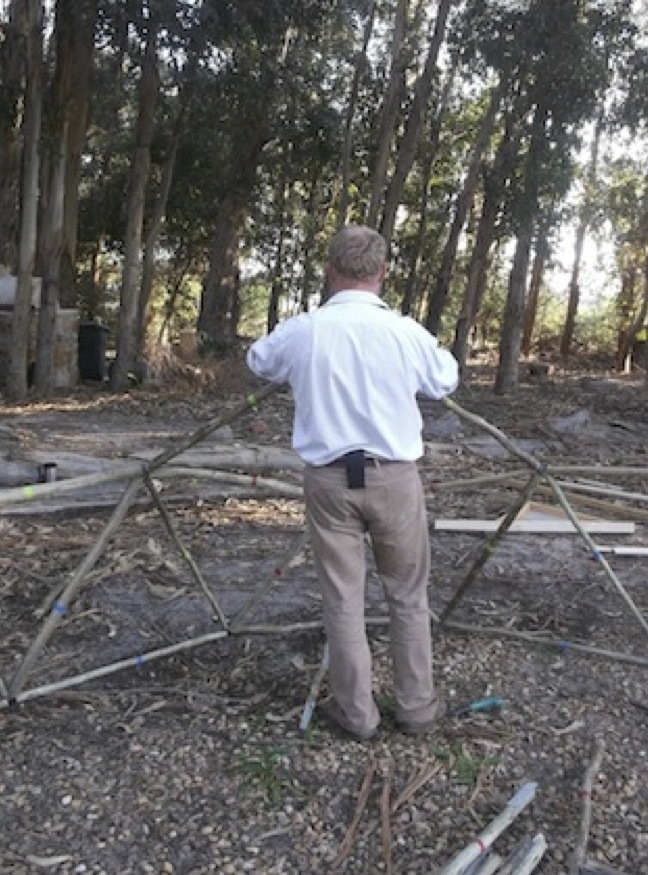 Pete Staley at work on the large dome

struts
Once the designing is complete and you’ve picked the variant of geodesic dome you want, and the size of triangle that is appropriate, you can cut your materials en masse. Try to limit the design to one with 3 different sizes of triangles. With all sides the same length you can only build the platonic solids. The more different lengths the smoother the dome will be. But it will mean cutting different lengths of struts (the straight pieces like ribs of which the dome may be composed). 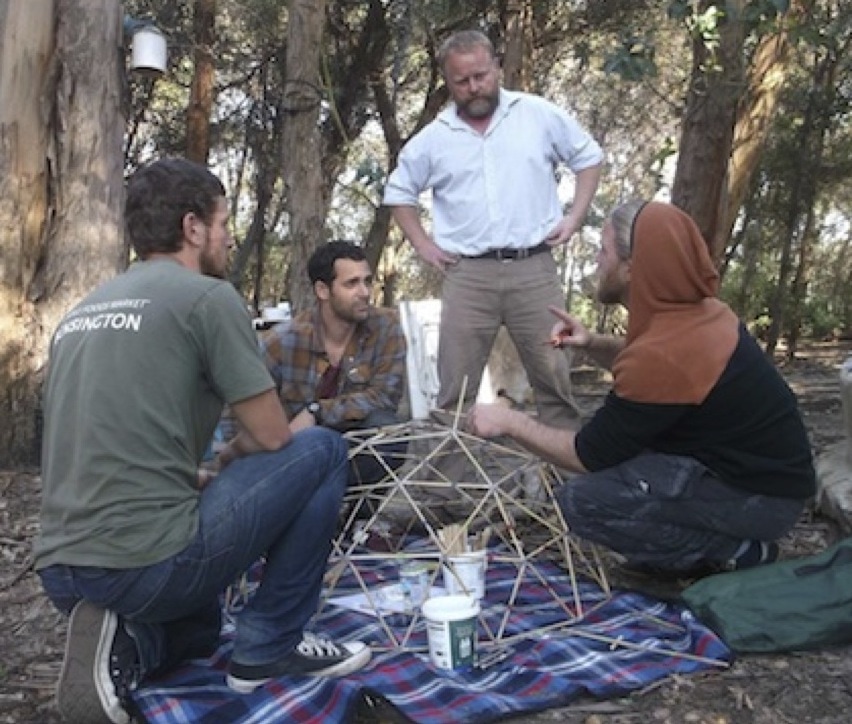 discussing the model made by our team

hubs
The geodesic dome can be constructed with or without hubs.
With Hubs
In this case the dome is composed of struts which meet at hubs, or joining points. The simplest idea is to flatten PVC piping at end and put one hole through, through which a screw can be put to fasten all the other struts at that meeting point. Another is to slit the end of bamboo and insert a metal plate used as a hub. Or to use an angled metal plate with two surfaces at just the right angle for the curve of the dome. Holes through these plates allow the attachment of the struts. You can also weld a central cylinder with radiating plates with screws in for 5 and 6 strut hub. Another method is to make flat circular wooden hubs with holes in them. Precisely cut notches in the end of your struts fasten them at just the right angle to this wooden plat to curve with the dome. Pete Stayley also recommended a double skinned dome for maximum strength. The two skins would be joined by noggins or braces.
Hubless building
Cut 10 to 11 degrees off the long edge of the strut, so that it is slighly narrower on one edge. Set up a trianglular jig, that allows three of these struts to be placed in it and lean in ever so slightly, towards the imaginary dome centre, cut the ends of the struts to get a perfect fit and attach them firmly to each other. Take many of these triangles and connnect them side to side, flat wood face to wood face, to form the dome, each triangle can be coated with plastic before assembly, and folded over for non penetration of rain.
Another hubless structure would be composed of solid triangles with perfecly angled sides joined together. ​

Wood can be treated with cactus juice, tobacco, orange oil or scorching.
LIght domes whether flexible or rigid, use minimal materials, which can be made from recycled waste, they save electricity and are beautiful to look at, and thus comply with the principles of permaculture. 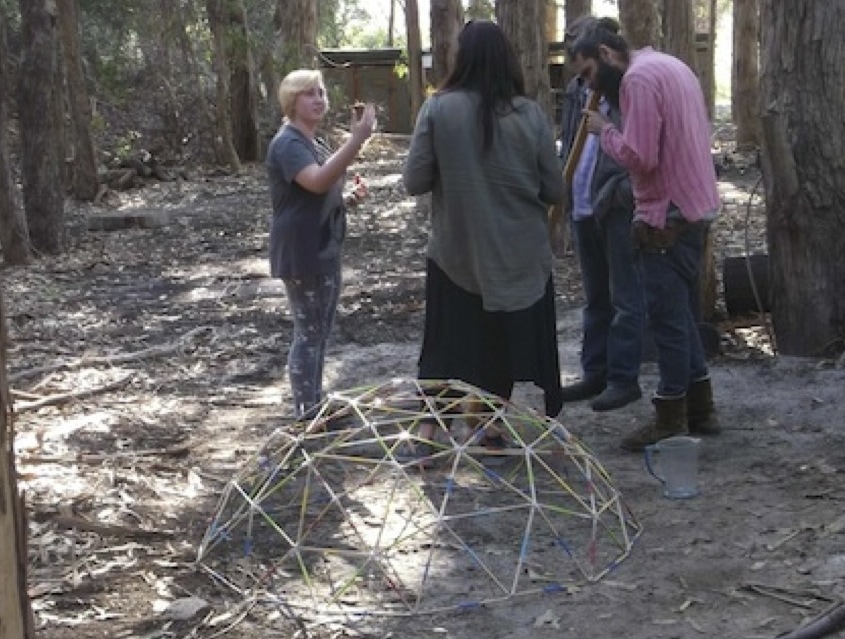 taking a break from building the geodesic RHOMBICUBOCTAHEDRON

To build with less materials and more durability and to eliminate waste, the triangular frame, as the strongest open shape incapable of distortion, can be used as a building part. For the same volume, a dome structure has 30% less surface area than a rectangular one, and for the same volume, has a 250% larger floor area. Thus they both conserve heat by minimizing surface area for heat exchange with the air, and use less material. They are also five times stronger than a normally shaped four sided building using the same materials ​ 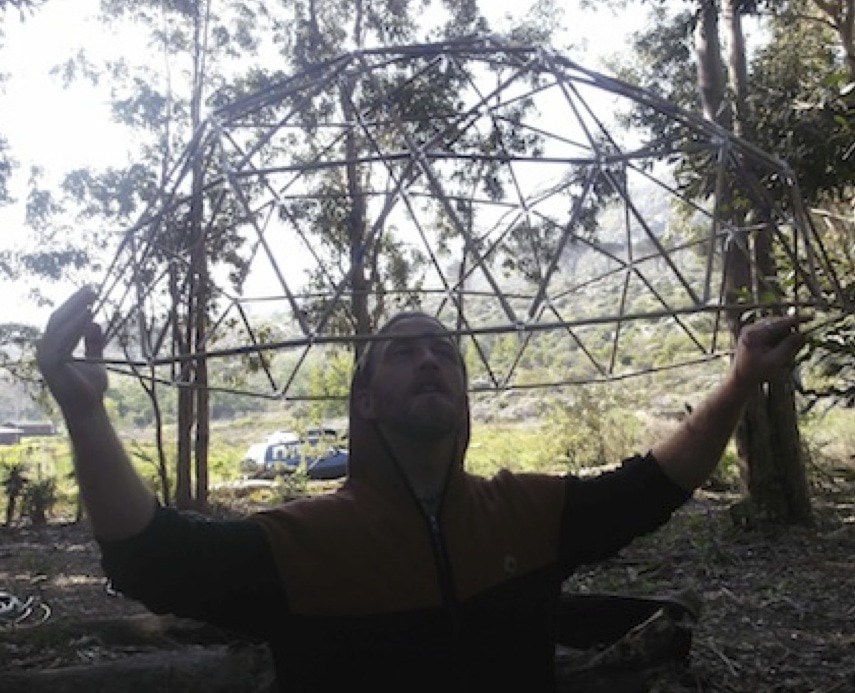 Since the temples of the ancient world, probably since we lived in caves, we experience a spiritual significance attached to large vaulted spaces. The geodesic dome is awesome, and its mathematics and patently visible geometric complexity, its elegance as a structure contribute to the fascination it holds for those seeking alternative building methods and spirituality. However the city environment will tell you it is not just esoteric motives which drive geodesic dome building. As you will see on the commercial dome building website below, domes are resistant to wind, even tornadoes, raging bushfires, earthquakes, and high pressure. The geodesic dome adds to this the virtues already mentioned, its relative strength compared to other non monolithic structures, and its economy with material. I was surprised to see a geodesic structure roofing one of the tanks at the local oil refinery !  I should not have been. ​ 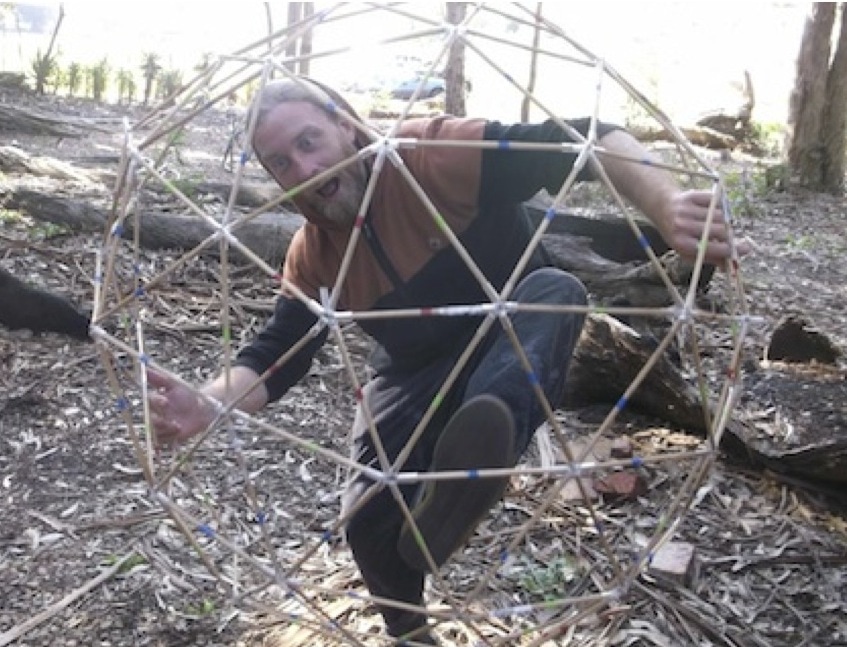 the dome did it

some other wonderful types of green building

domes and their inventors

diagrams of dome shapes and typology