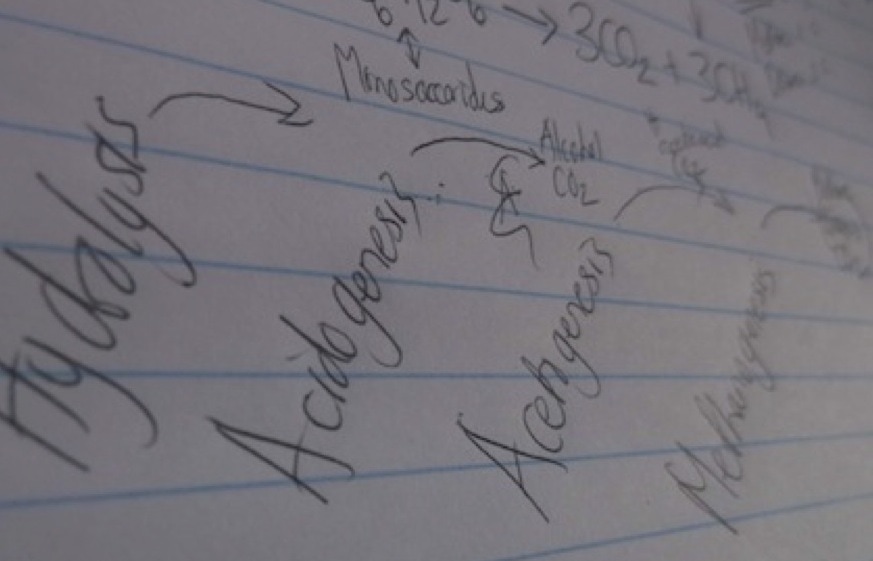 In the biowaste digester large molecules are split by hydrolysis and through the action of bacteria, breaking down the large insoluble molecules called organic polymers into simpler molecules called monomers. Carbohydrates become sugars, proteins give amino acids, which are soluble, and fats give fatty acids. Their smaller molecules being soluble makes them available to another range of bacteria which accomplish the next stage, acidogenesis.
Acidogenesis is called a fermentative process, a type of fermentation. A parallel we know in our daily lives is the souring of milk or making of wine. The monomers such as amino acids, sugars and fatty acids each break down into different simpler forms, like hydrogen and ammonia, hydrogen sulphide, organic acids like carbonic acid, and carbon dioxide, alcohol, and volatile fatty acids.

The acetogenic stage will turn the organic acids into acetic acid (the characteistic  ingredient in vinegar), and all the original inputs end up as Carbon dioxide, Hydrogen and Acetic acid. All of these substances will lead to an acidic environment, in which at very specific levels of acidity, the methanogenic process completes degeneration into two very simple molecules: carbon dioxide and methane. Methane is the simplest of the alkanes, a group known as the simplest organic molecules as they consist only of carbon and hydrogen. Methanogenesis is performed by Archaea, an organism like bacteria but has evolved differently.

Here is the chemical formula for the decomposition of glucose into carbon dioxide and methane, skipping over the acidogenetic and acetogenetic stages in the process. Glucose is a simple sugar, and earlier stages of decomposition may have converted plant starches or cellulose into glucose.
​

According to the theory, in which atoms of the basic elements on the periodic table link together to make molecules, this simple sugar molecule consists of 6 carbon, 12 Hydrogen and 6 Oxygen atoms. When it splits up it gives rise to two different substances, 3 Carbon dioxide molecules which consist of two Oxygen and one Carbon atom, and three methane molecules which consist of one Carbon, and four Hydrogen molecules each. If you count the number of atoms on the left of the arrow, you will see that there are the exact number of atom in the new, smaller molecules on the right, nothing is lost. So it is like a chemical equation.
​

methane than and now

In old fashioned anaerobic wastewater treatments, these two gases, methane and carbon dioxide which make up most of biogas, would just escape into the atmosphere, leaving water behind, which at the time represented a solution to a problem, that of excess human waste (feces) where many humans lived together. Today human feces as well as rubbish, and some industrial waste, which would otherwise be burned, or dumped in landfills or end up in rivers and oceans are processed via anaerobic digestion, in different kinds of plants. If the gases are harvested and cannot escape they hugely reduce the emission of greenhouse gases from the waste plant. Localized, smaller digestion facilities and methane harvesting also represent enormous savings both financial and ecological, on fuel for transport, and grid losses.
The end product of anaerobic digestion, which recycles anything organic, from human feces to certain industrial wastes, and garbage fractions, is not only biogas but organic fertilizer or compost.
​
Reference
https://en.wikipedia.org/wiki/Anaerobic_digestion