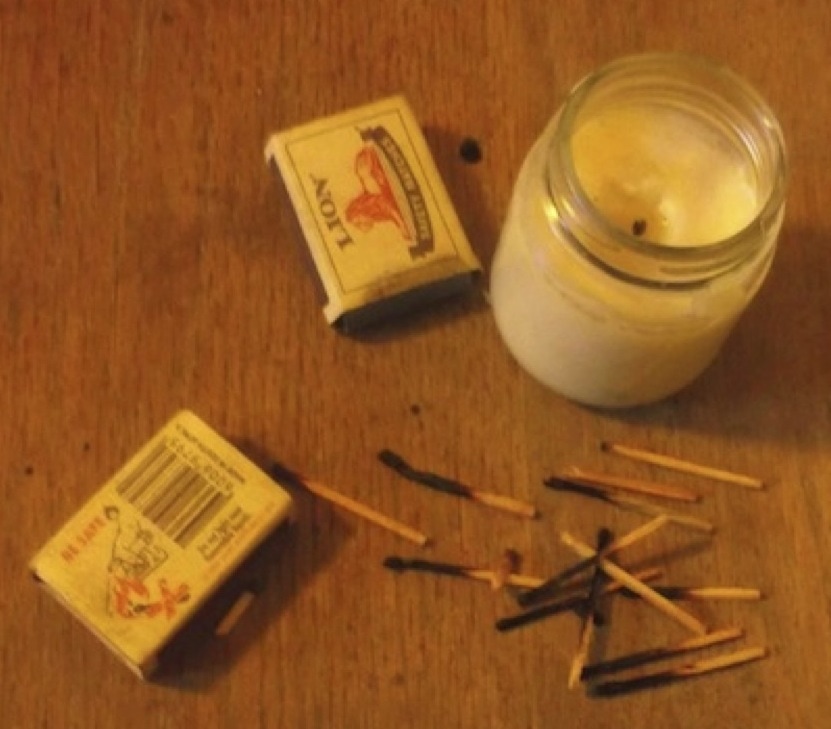 The next step in making recycled candles was to test the candle made in a glass. The tallow candle in the small glass would not burn. The wick flared up and burned down in a second, and the little stump would not light. After doing more reading on wicks, I realize that there is more of an art to it. Sometimes you will read that ordinary cotton string works just fine, but the people who made these candles are (probably) very lucky. Watching one tallow candle making video I thought “hah… very good, you’re using string….. just let me see you light it though” and lo, the video ended with the man trimming the wick nicely, but he did not light it !

Maybe the wicks in recycled candles can't be recycled !
A wick maintains a delicate balance between the type of wax (or fat in this case) and the wick’s burning rate which depends partly on size. Properly crafted wicks are also made of special fiber combinations so that they curl over as they burn, at a specific rate, not too little or too much. My first wick made from fat impregnated cotton string burned very well, for at least 30 minutes. The next candle, using exactly the same wick, didn’t burn at all. Two things had changed, the container from metal to glass, and the burning material or fuel. The first candle consisted of very pure sheep tallow, which is much harder, and the next consisted of mixed fats. It is possible that the string in the wick was also older, more worn, less compact as well as thinner from wear, but I didn't notice at the time. I wonder if I was lucky and the fuel wick balance in the first was just right. The sheep tallow liquifies more slowly, and the thin string wick was perfect for that. I wonder if the mixed fats liquified more rapidly, and burned more rapidly, causing two problems, that the wick burned down too rapidly, being rather thin, and that more liquid fat was formed and drowned the wick. Alternatively the wick may have been insubstantial in itself. I don’t know if this was it. The little tail of burned wick just would not catch fire at all, so I doubt it was drowning in liquid wax. It did burn down to that point extremely fast, almost explosively, and this is related to thinness.

back to the drawing board: recycled candles from renewable materials must be possible
I read of another problem with wicks. If they burn too slowly they will develop a carbon coated "mushroom cap" and smoke a lot. But my little wick had not burned too slowly, rather the opposite. Maybe it burned so quickly that it completely carbonized and there was nothing left to burn, and I was trying to light a burned out carbon stump and some cold wax.
I thought the fat would be the problem, and burn terribly and catch fire, and smoke a lot, but all my experiment and reading has taught me that the wick is a problematic element in all candle making, whether you are using beeswax or tallow. Easy wicks made of string that always work are a myth. If it works, that is great but the success rate will  vary.

The wicked and the good wick, identical twins, divergent burning

After rendering more tallow, I poured two large candles. One lit, and burned for twenty minutes, till i blew it out to see how the cold wicks looked. The other wick flared up, burned out, and wouldn't light again. They are from the same pouring, and the only difference was the wick again. The one that didn't light was very saturated with fat, and it was soft fat, the wick was still soft and sticky to the touch when I cut it. The wick that lasted was stiff, and seemed to have got the right amounts of hard fat. Both batches of fat were mutton, according to the butcher. I leave the art of candle making to the experts with a vastly improved respect for their skill. Its not the focus of my writing, only a recycling issue for me. It scarcely makes ecological sense to me when more energy goes into the candle production than ever comes out of the candle !

green homes: many ways to meet the challenge

the first page on recycled candles

the second page on recycled candles

archival material on the problems people have with wicks