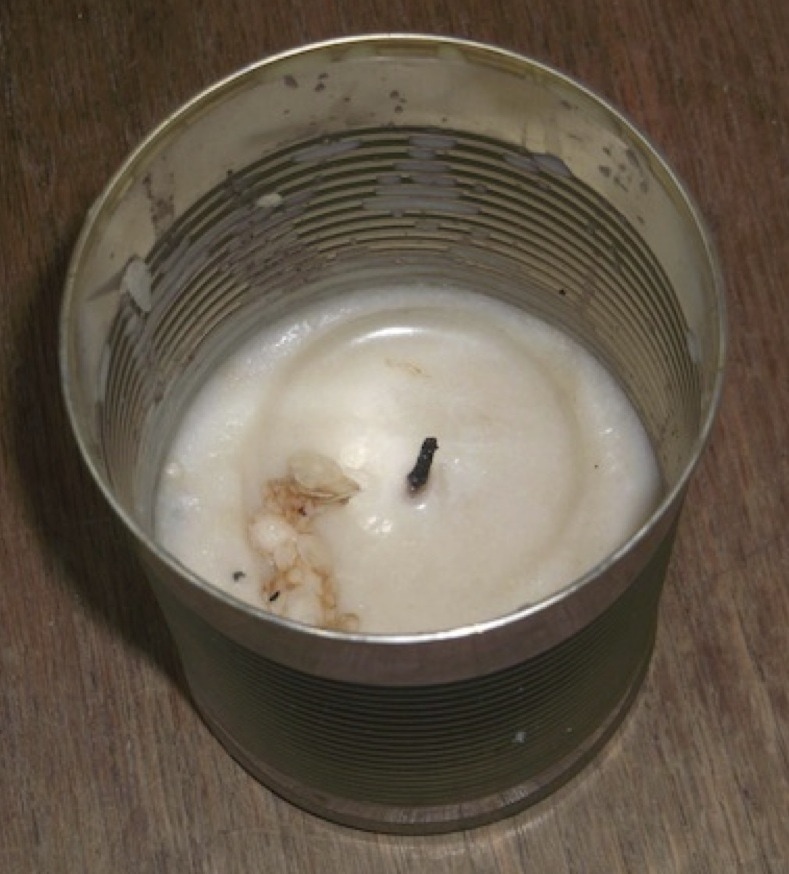 The second experiment with making candles out of tallow gave a much better result. The candles made in tin cans burned wonderfully without giving off smoke, and shed a whitish light. The pure mutton tallow was very clean looking. Only a little lard around the flame melted during burning, just as with a normal candle but slightly larger, so I thought it was not necessary to have heat proof containers after all.  Perhaps it is necessary if you use very soft fats however. The disadvantage of the tins was that they buried the light within themselves so that as a light source they were very dim. ​ 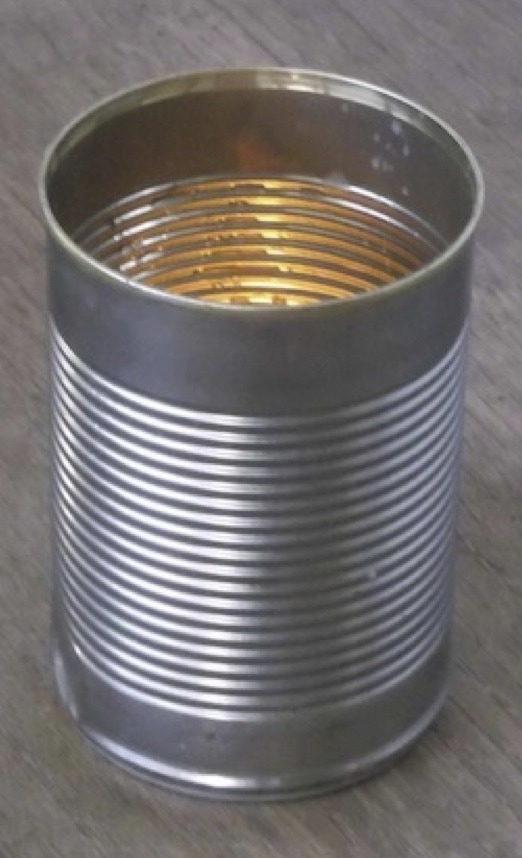 the candle light is hidden by the tin, only a dim flickering escapes
As a solution one could either puncture the tins to let some light out, or pour the candles in glass. The more I thought about puncturing the tins, and that I would need some kind of last to do this without crushing them, the more I leaned to glass. The internet research recommended mason jars, as they are heat proof, but really I think its excessive. With a hard mutton fat candle there is not enough melted lard to touch the glass, and mason jars are expensive and needed for other things and furthermore, I want to recycle the glass food jars I’m forced to buy and see how they do under the strain. 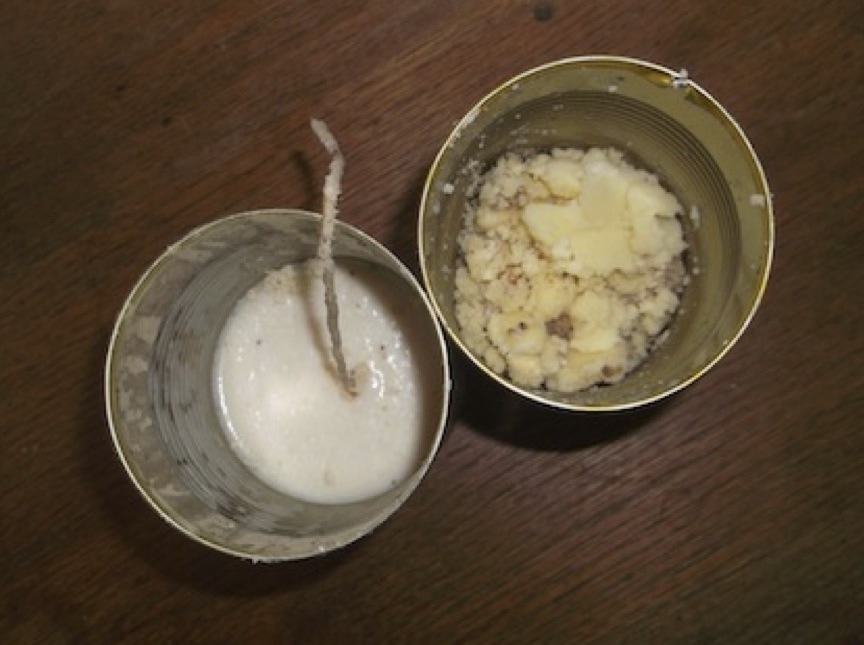 THE DIFFERENT COLOURS AND SMELLS OF DIFFERENT FATS FOR MAKING CANDLES: BRIGHT WHITE OF PURE MUTTON FAT ON THE LEFT, AND YELLOW AND SMELLY MIXED FATS ON THE RIGHT

The next action was to remelt all the fat in the tins and remake the candles in glass. So, the next day I melted down all the tallow in the tins, including the fat extracted from machine waste. You can see how white the pure mutton fat is, and how yellow the mixed fat from the machine waste, before melting. The mixed fat also has a horrible smell, whereas mutton fat you could describe as perfumed. 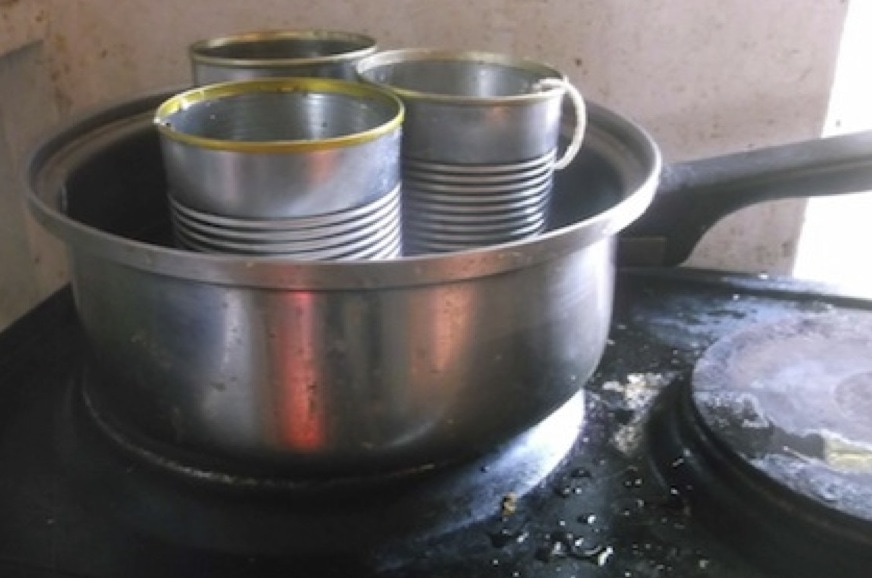 In South Africa most sheep are free range and eat aromatic herbs in the Karoo desert, so our mutton may be specially perfumed. The ancient Hebrews offered up burned mutton fat as a “perfumed offering to the Lord”, and indeed there is something like incense in its smell. While the mutton fat candle was burning there was no smell at all, however. 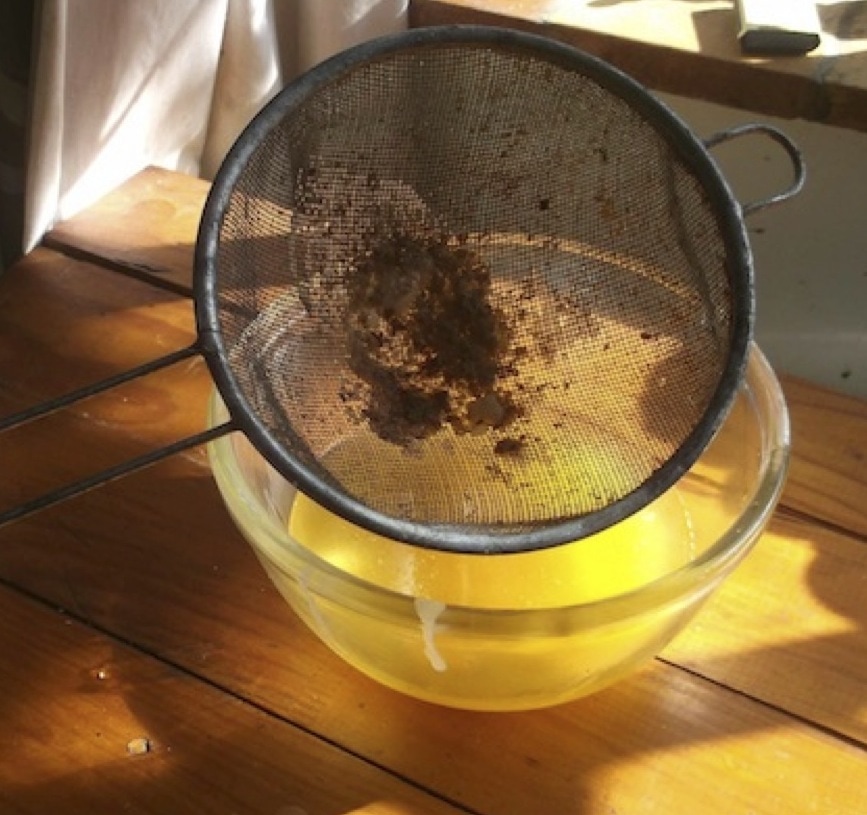 THE FAT FOR MAKING CANDLES MUST BE CLEANED IN SEVERAL STAGES, SIEVE IT WHEN LIQUID.
​I poured the remelted fat through a sieve into a glass bowl. A lot of brown residue was caught in the sieve. I let the bowl cool, and then put it in the fridge. 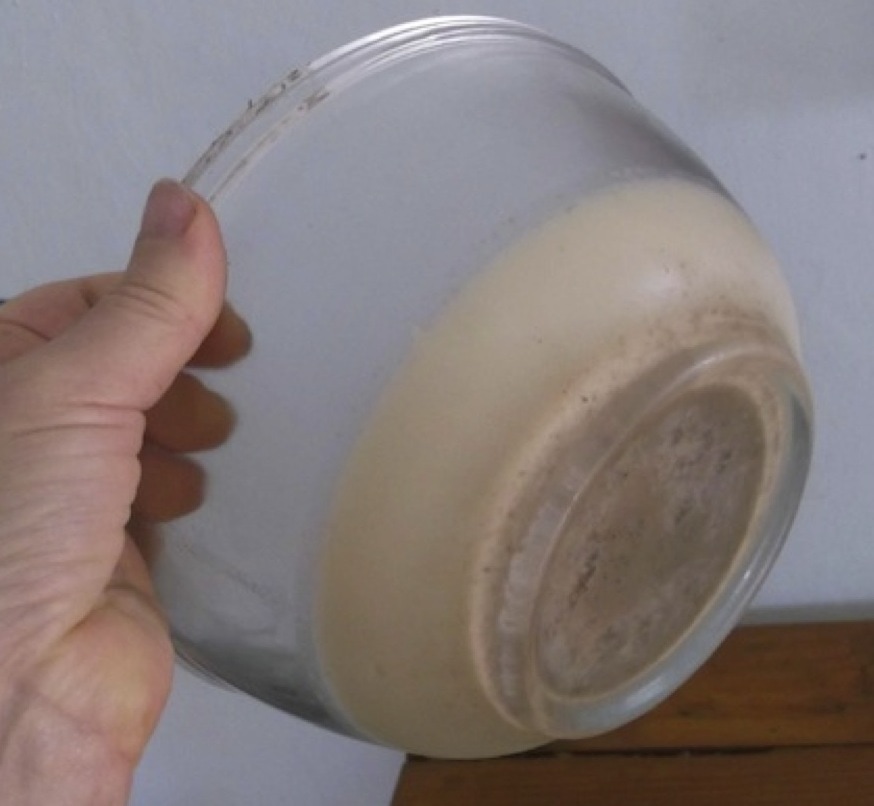 The next day I warmed the bowl a little in a saucepan of warm water, and tried to flip out the fat. This didn’t work too well, maybe due to vacuum pressure. When I slit the fat with a knife it all slipped out of the bowl easily. I then cleaned the meaty residue off the bottom of the fat, chopped it up and remelted it. 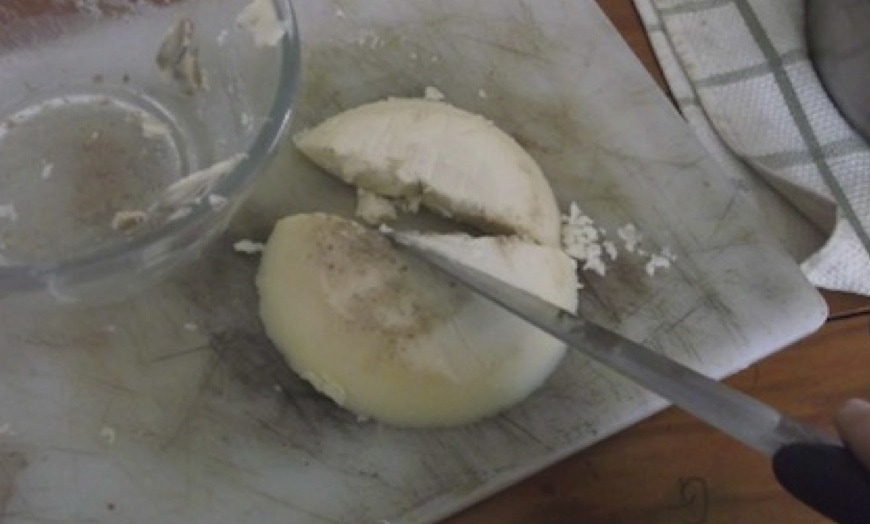 scrape the browns off the cold fat

While the fat was liquid in the tins, I soaked an extra wick. ​ 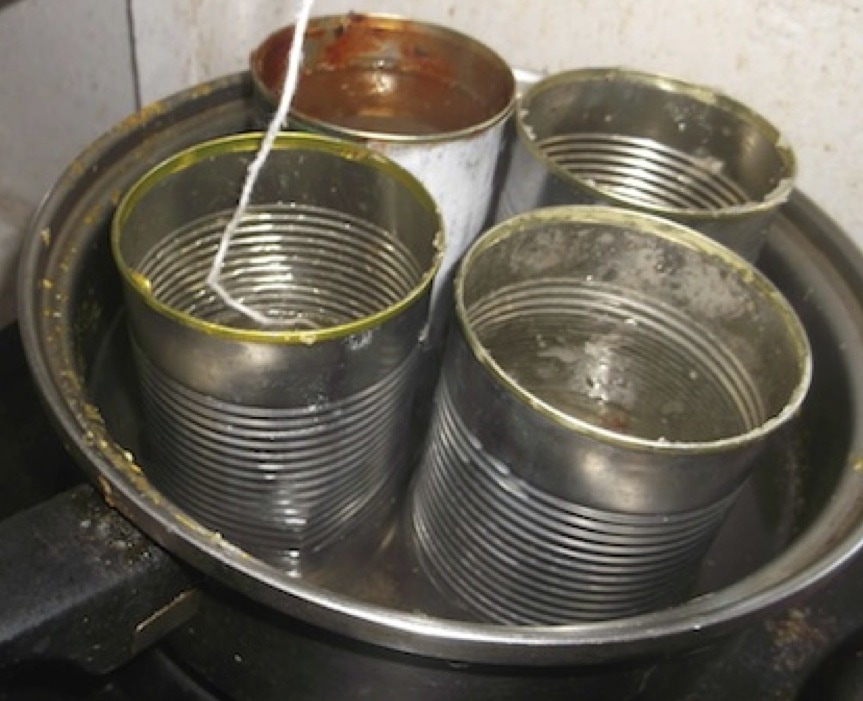 SOAKING A NEW WICK. THE EXTRA TINS ARE TO KEEP THE ONES CONTAINING FAT FROM FALLING OVER AS THE BOILING AGITATES THEM 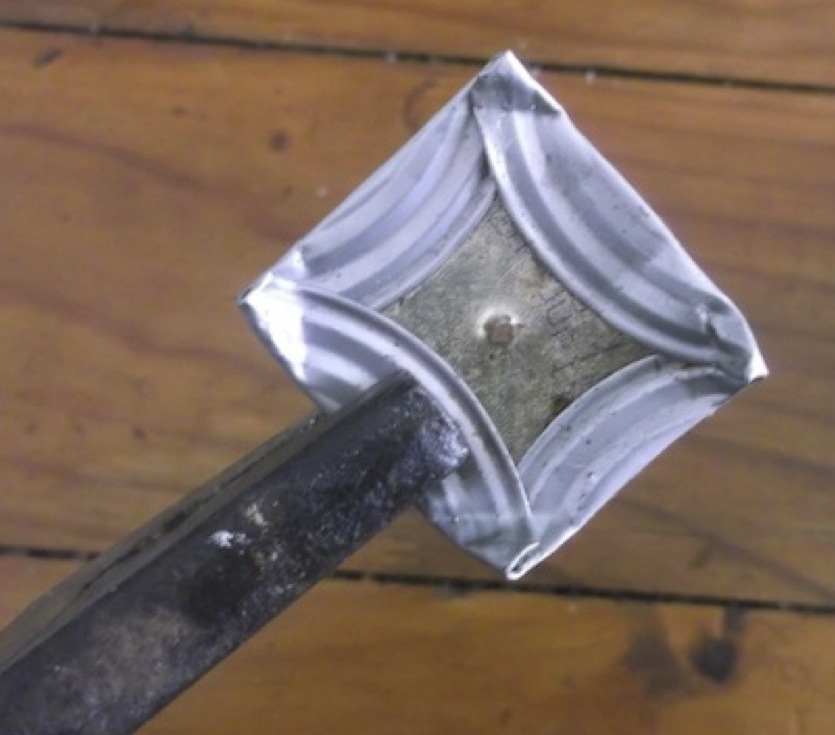 At this stage I also prepared the two bottles. I chose ones as ‘straight up and down’ as possible, with the least amount of narrowing at the neck, which could cause the neck to catch heat and crack or explode the glass.
The remelting went so quickly, and so little heat was required, I could handle the tins without oven gloves, but check first in your case.
​ 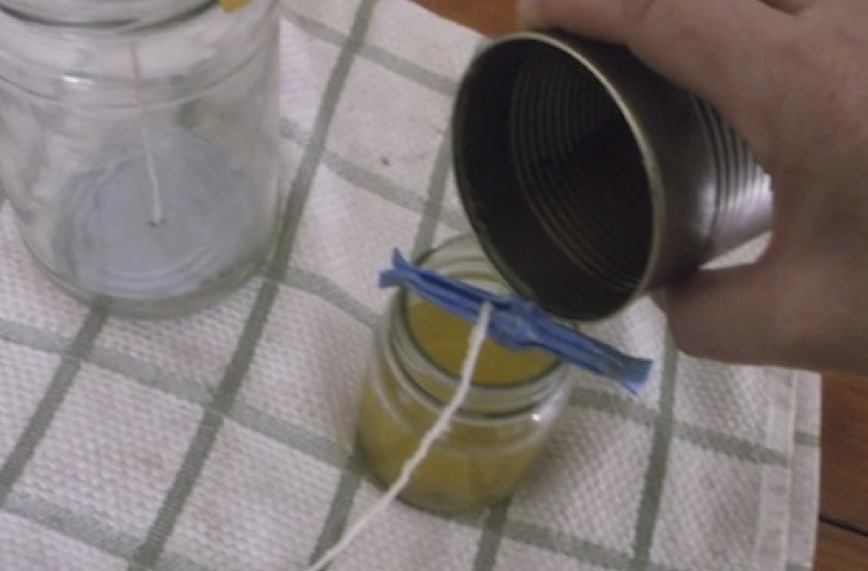 gently pour the fat into the jars prepared with wicks, wick anchors and pegs to hold the wick in the centre
As you can see the glasses are almost empty. I needed more tallow. The next step would be to render some more of that, and I’ll photograph and explain the proceedings. I must find a place where I can buy raw mutton fat first. 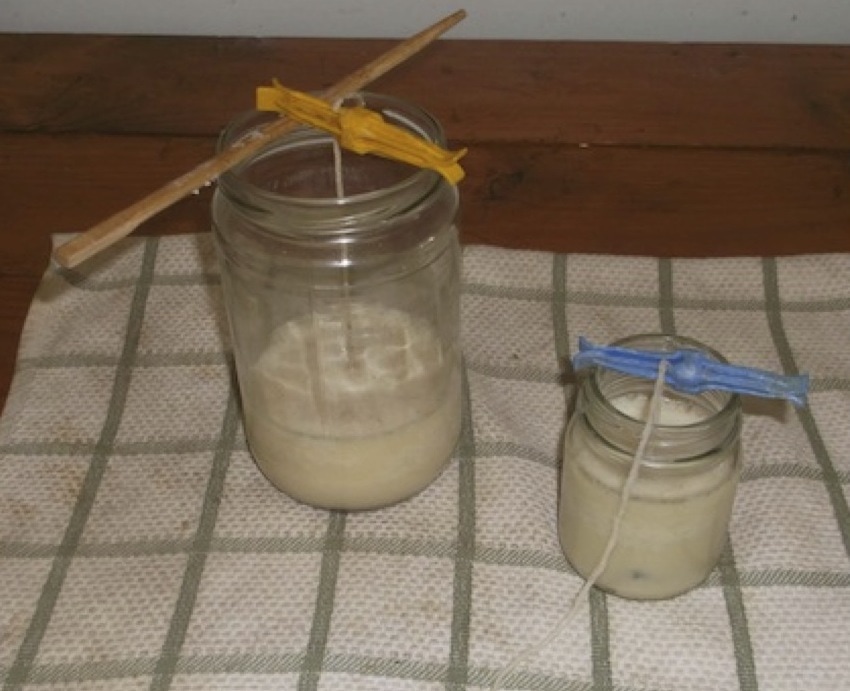 hints and habits for a greener home

A first attempt at making candles from recycled tallow: trouble shooting, and making your own wick