eco candles made from tallow

how to structure eco candles made from recycled materials and tallow 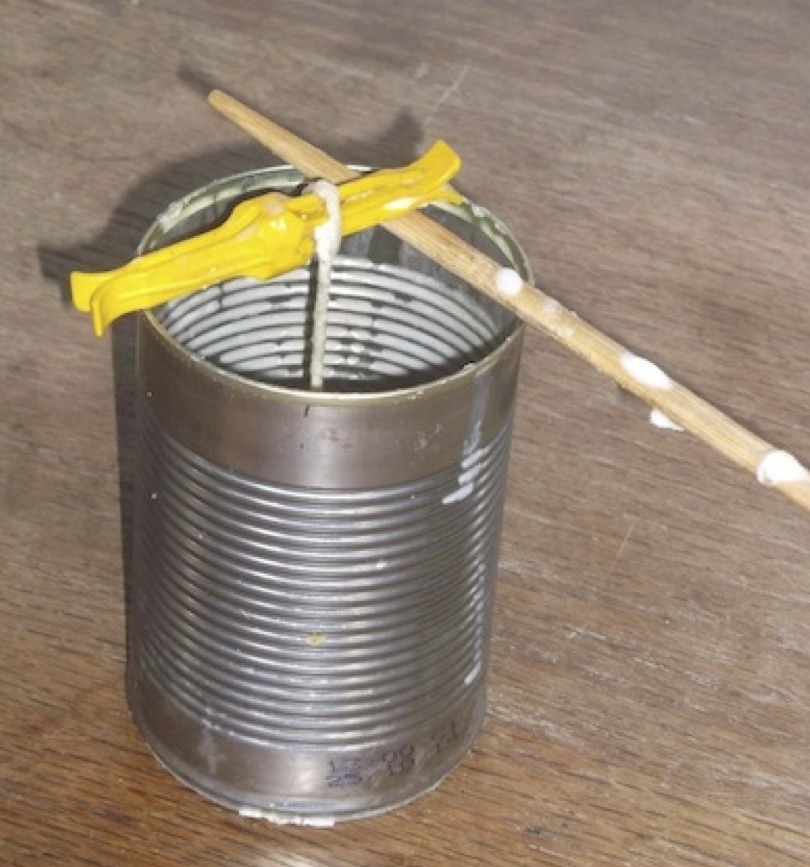 ​I set about making eco candles because I’m one of those people who recycles everything. I started making candles out of tallow because I had a lot of left over fat after making my dog’s food. I boil up bones and machine waste for him to stop him from eating sand to get minerals. I couldn’t feed the soup to him without removing the fat, as a fatty diet gives dogs kidney disease and causes premature death. I used to put the fat in the bird tray and the garden birds gobbled it up, but eventually there was so much that even they could not eat it all. I also wondered if I was causing the bird's arteries to clog up. Then one day I was presented with mutton bones at the butcher, and they were caked with fat, which is whiter than beef fat and I suddenly thought of making recycled candles in my home using the fat and other waste.

my first attempt at eco candles
I went right ahead. I scooped fat off the bone broth, put it in a small metal pot, and in the recycling spirit, tore an old kitchen towel (one with looped fabric) along the seams and used the tightly rolled seam as a wick. I hung it in a glass jar using pegs, and poured the rest of the fat into the jar. This first attempt was a failure, the wick did not burn for longer than a second and poured out smoke.
​
changes to my method for making eco candles
I thought that it was never going to work, and got a bit sad, but pressed on. It was necessary to find more information. There was no single internet source which explained everything from rendering the lard to making wicks and candles, which is why I’m writing this page. I read up on making wicks for the usual wax candles and found that you can use a material readily available in the home, that is cotton string. One must also saturate the string with wax, and I wondered if this was crucial. I had put my previous wicks in dry and assumed they would draw fat up while burning, but old dishcloth seams don’t burn too well on their own. I decided to try soaking the wicks made of string in the fat not wax, and see if it would work as well as wax. I remelted the lard. This time I soaked the wick really well for 20 minutes in the simmering fat, and hung it out to cool. I looped it over the tine of a fork, and placed it on the window sill with a weight to hold the fork and a dustbin beneath to catch drips. ​ 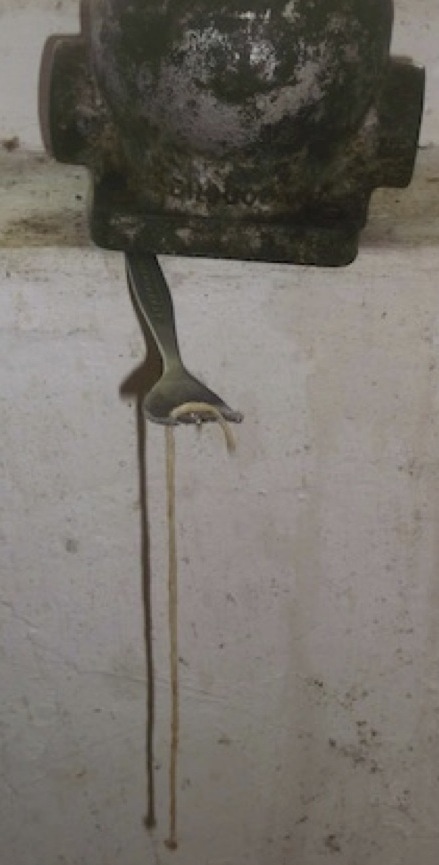 fat impregnated string cooling off: using a fork and a weight

​I thought it would be great to make the candles in tins, as they can take heat, and in the recycling spirit, I have excess cat-food tins to get rid of. I decided to make a wick anchor as below after my first experience. You need to secure the wick. I found out with the first candle that it will float around if not secured, and end up stuck to the wall. 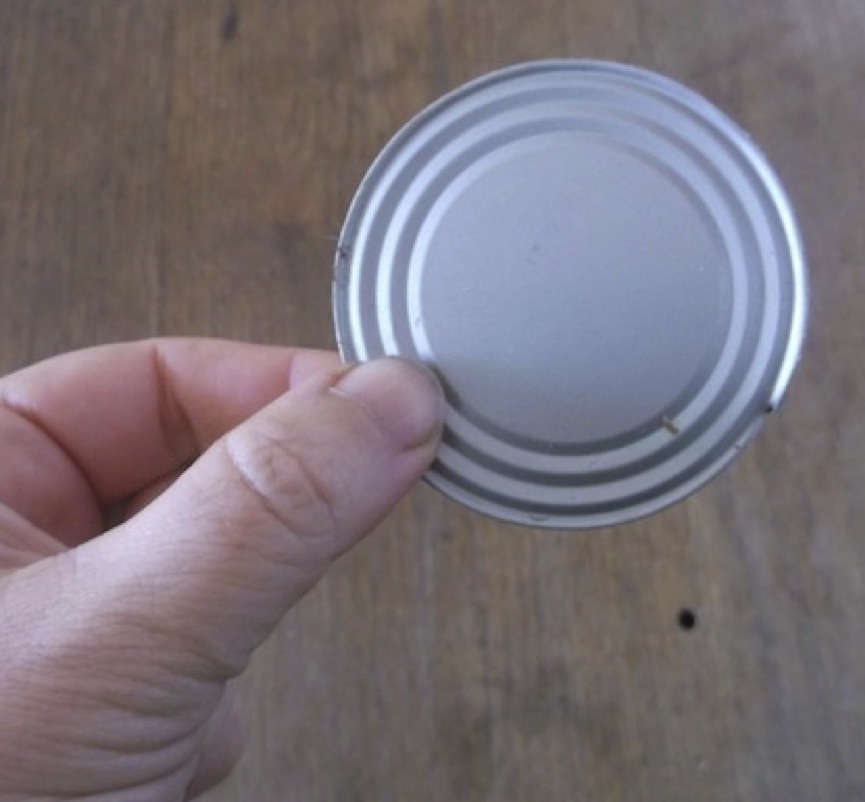 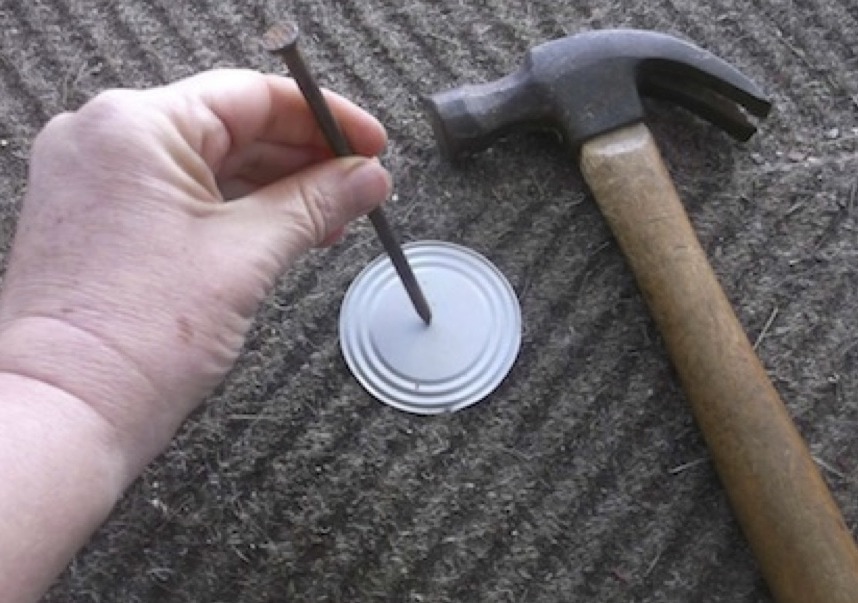 hammer a hole in its centre with a nail. I put it on some old carpet tiles piled three high to protect the floor 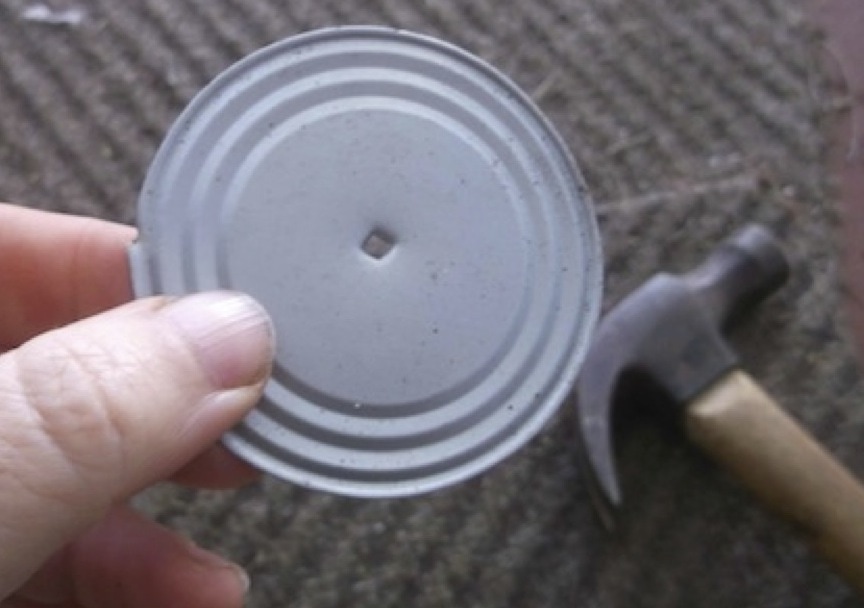 When the fatty wick was cool and stiff I cut it up and used the disc to make a wick anchor by threading the wick through the tin disc. ​ 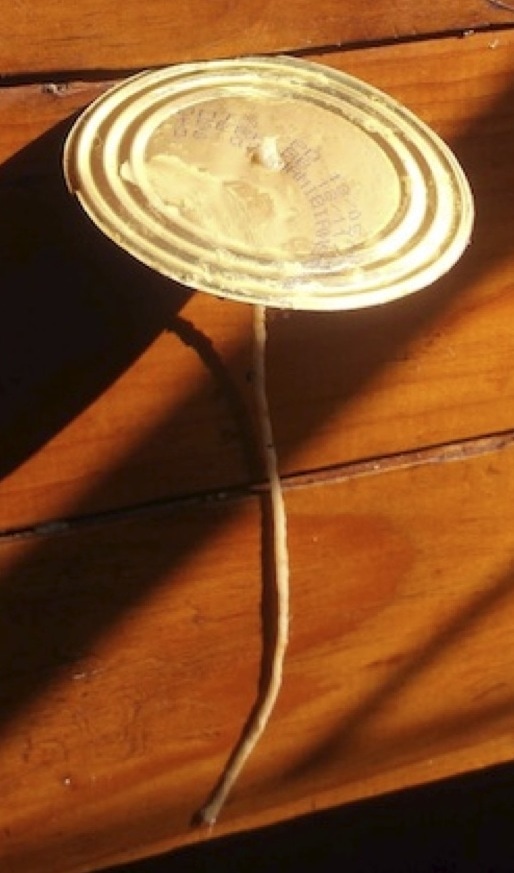 Then I let the anchor down onto the bottom of the tin can holding the long tail. Its a tight fit and will hold the wick in the centre of the candle. I secured the top end of the wick in the centre of the can opening with pegs as you can see at the top of the page, and then slowly pour in the molten fat. I let it cool and then put it in the fridge. I'll describe the result on the next page.
toxins in commercial wax candles make this an eco candle.
While reading up about lard or tallow candles, I found to my surprise that one could call them eco candles for a number of reasons. I knew that they are made with fat 'waste' so that recycling comes into it. However, they are also ‘healthier’ than wax candles, because wax exudes petrochemical fumes in small amounts and some commercial candles contain toxic additives which are released into the air during burning. Lard on the other hand is odorless and toxin free. It also creates light from a renewable energy source, whereas commercial wax is a petrochemical product, so it is non renewable. On the other hand, I understand that using slaughtered animal products is objectionable to some people, not just for religious but for green reasons, as meat production wastes resources. In his case beeswax would be a better solution as a fuel, if you can afford it. Then again, beeswax is expensive because it is in short supply, and its a precious substance with other uses.

links to other tips for living in a green home

making candles with tallow in tins or bottles